Adding 97 improvements and 39 new features, REALbasic 2009 Release 4 offers the most requested feature from REALbasic users, reporting! Also included in this release for REAL Studio only is build automation. Finally, our new feedback system is now live.
The new report editor allows developers to visually create a layout for printing by dragging and dropping labels, fields, images and more. Reports can be created to print a single page or multiple pages. The layout is divided into sections (header, body, footer as well as grouping sections for reports that have sorted data). 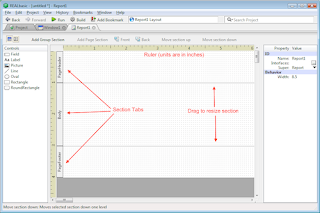 Reporting in REALbasic
The new build automation feature of the Project Editor is only available in the REAL Studio Edition. With Build Automation, developers can visually drag and drop build steps to execute common actions (like copying files and running IDE scripts) before and/or after their application is built. All of this can be done from within their project. 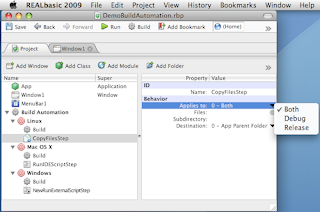 Build Automation
The complete list of improvements and new features in this release can be found in the release notes in the product download section, http://www.realsoftware.com/download. REALbasic and REAL Studio are available in a free 30-day trial edition. To view a video demonstration of all of the new features in this latest release, please visit: http://www.realsoftware.com/realbasic/newin/2009r4

Hmmmm... it's almost October and no sign of Cocoa.

This very blog told us that Cocoa would be "shipping some time this fall." It also suggested that Cocoa release had slipped by "one quarter" from the end of Q2 2009 to the end of Q3 2009.

Q3 2009 ends tomorrow and Cocoa support in Rb is nowhere to be found.

I guess this is yet another in the long line of "Cocoa Fables" told to us by Real, starting with this one...

IF Cocoa ships in December 2009 it will only be three years late.


So... don't even bother trying to explain the schedule for Cocoa at this point... we no longer believe you.

It would be nice to have an update on Cocoa and the SQLite version.
Any more news on either?

Well, I'm a little disappointed that Cocoa isn't here too, but I believe that we were in fact told months ago that REAL would take as long as it took to get Cocoa right.

Less than four month ago this very blog told us we would have Cocoa by now.

Here's the link the Geoff's previous post on the topic. And here's a quote from that blog entry:

We are making terrific progress. It was slow going at first but we able to move faster now that we have laid the groundwork. At this point, we should be feature complete by the end of the summer and shipping some time this fall.

When we give an update on something we are working on, we are not trying to mislead anyone. Quite the contrary. But the Cocoa project is a HUGE project and everyone knows that the bigger a project is, the more difficult it is to project cost, delivery date, etc. However, as we make progress (and the remaining parts of the project get smaller) our ability to predict delivery gets easier.

Believe me when I say that if we knew for sure at the beginning of the development process exactly when we would be done with Cocoa, we would just say that. Again, we are not trying to mislead anyone. That would benefit no one.

The other choice for us is to simply say nothing but we know that users want updates on important issues such as this one.

> However, as we make progress our ability
> to predict delivery gets easier.

And yet, that's the opposite of your actions.

Three (almost four) years ago Real's Cocoa announcement dripped with false certainty. As recently as June, Geoff was telling people Cocoa would be shipping "this fall".

In contrast, the most recent blog post about Cocoa is full of uncertainty and sets no expectation of a ship date.

Shouldn't it be the other way around?

Geoff is not "blowing smoke". Not only is the Cocoa implementation a big job, the schedule has been blown more than once by forces beyond the control of RS (i.e. Apple).

Care to elaborate on how Apple has blown Real's Cocoa schedule?

Please don't point at the transition to Intel... Apple announced that six months before Real announced their Cocoa plans.

Surely Snow Leopard didn't throw a wrench in the plans announced back in 2006.

Has Apple been cranking out too many great iPods, thus distracting the dev team?

Less than four month ago this very blog told us we would have Cocoa by now.

We are making terrific progress. It was slow going at first but we able to move faster now that we have laid the groundwork. At this point, we should be feature complete by the end of the summer and shipping some time this fall.

I just checked the calendar. Autumn began about a week and a half ago. Geoff's post said that REAL "should be ... shipping some time this fall". Now maybe I'm not understanding Geoff properly here, but "some time this fall" does not mean "before fall gets here"; it means "before the end of fall" which would be around December 21. Granted, that date could slip too, because not every big software project that "should" be finished by such-and-such a date is finished on that date, but that quote is pretty thin evidence that "REAL was just blowing smoke ... again."

Although the scheduled delivery of Cocoa support has slipped, which is disappointing, I very much appreciate Geoff choosing to share their intentions of providing it and keeping us informed as they make progress. It does in fact appear to be a huge project. Professional developers know that even with smaller projects it can be difficult to predict the effort involved, external influences, and elapsed time to delivery. So in this case it's no surprise that it will be delivered later than expected. Better late and done right than rushed to meet expectations.

Thank you Geoff for the transparency on your Cocoa effort! I hope you continue this trend of sharing with us your new feature intentions and progress while developing them.

Cocoa, I cant hear it anymore... as programmer I know how things might get more complex than expected... so I keep patience and thing, it will be done when its done....

Right now I am in struggle with your great report function. On the first view its great, on my 1st day with 2009r4 I've build a small reportviewer for my apps based on your sample scripts, information from your manual and community feedbacks BUT...

the more I am dealing with the report class, the more I see that this is still Beta and never should be released in a productional Realbasic. I just say: Footer, multiline-word-wrapped strings and the lack of objects to manipulate objects before and after rendering.

I better wait a little bit more and have a better and stable realbasic, than any kind of green beta bananaware a la microsoft

Despite what the Release Notes say,

TextField alignment still does not work on Windows XP.

Apparently the issue is only with XP. It works with Windows Vista for example. However, we are looking into it to see what we can do for the next release.