Real World 2012 in Orlando was a huge success and if you don't want to take our word for it, we'll be posting guest blog posts from several Real World attendees over the next few weeks.


For those of you who weren't with us at Real World and who didn't follow our live tweets during the keynote, Geoff covered a lot of upcoming changes to Real Studio, many of which are as far away as 2013. Here's what we can share with you today:


Real Studio 2012r1
2012r1 is scheduled to be released in August with the current IDE. It will include over 300 bug fixes, including over 50 Cocoa-specific fixes. In general, your app will use less memory (due to optimized variants for strings) and will be about 1 megabyte smaller. 2012r1 will also have HTML Viewer support for WebKit on Windows, and incremental BLOB support for RealSQLDatabase.


The New IDE
It's been almost 7 years since we introduced the last major update to the user experience. Our goal is to make the IDE more intuitive, more productive, easier to update while incorporating a modern look and feel.


The New Pricing
First, yes, the IDE will be free! You only need to purchase Real Studio when (or if) you need to build. Leaving behind editions means all features are included in the IDE. If you buy Real Studio you get all the features, from SSL support to the Profiler and Build Automation.

When the new pricing is introduced this fall, all current (not expired) license keys will be converted to their equivalent within the new pricing structure and new keys will be generated in your user account. With this new pricing some of you will be paying less, some more, for some of you Real Studio will now be completely free. We're announcing this now to give everyone the ability to renew for up to 2 years at the current pricing. See this post for further details.


New Framework
The internals of many of the classes that you use every day in Real Studio were designed at a time when Mac OS 8 and Windows 95 were the current operating systems. A lot has changed since then and to move into the future, we need to make some major changes. We don't want this to impact your current code so we are building a new set of classes to replace the existing ones. You will be able to use the new with the old in your existing projects so the transition will be smooth. Also, we won't be changing everything. Many classes will be the same as they are now, but the new framework will give us a chance to improve the internal design and make them more consistent for you as well. More details will be available in the months ahead.


64 bit
The majority of the framework has been updated for 64 bit. Next, we will update the compiler and start testing. 64 bit for OS X will come first because Apple is really pushing 64 bit and starting to provide some libraries in 64 bit versions only. Linux will come next because no 64 bit distros install 32 bit compatibility libraries by default. We expect to start building 64 bit apps for OS X early in 2013 and for Linux and Windows late in 2013.


1-Click Cloud Hosting
We also announced that we will begin to offer 1-click cloud hosting of Real Studio web apps later this year. This will offer Real Studio developers a very inexpensive and simple way to deploy and host web apps starting at only $30/month. This hosting is not mandatory, you can still host your own Real Studio web apps. To offer you this we are partnering with Rackspace, an industry leader in cloud hosting. We'll abstract you from the details: zero configuration on your part, serious security, predictable pricing and the reliability of Rackspace.


iOS Support
Geoff ended his keynote with one final demo- a Real Studio app in iOS! With just 3 controls, it's still in its very early stages but it was honestly exciting to see the upcoming reality of Real Studio with iOS support! 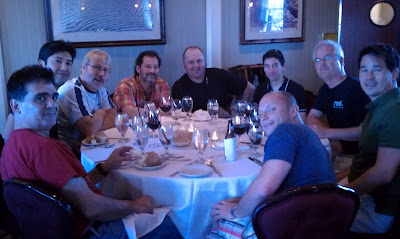 A Night at Fulton's
After the first day of Real World, Geoff's keynote was discussed over dinner at Fulton's Crab House. The dinner was delicious and the key lime pie was even better! Attendees chatted on the decks outside with Real Software engineers past sunset...though some of us walked back to the hotel through Downtown Disney and enjoyed some Ghirardelli's chocolate along the way.

We'd also like to thank all the attendees and speakers for making this the best Real World to date! See you at Real World 2013!
Posted by Alyssa at 8:39 AM

That last picture of the Fulton's boat was made from 3 differently exposed images, then composed into a HDR picture with HDRtist - another app made with Real Studio! :)

Nice job Thomas. I used HDR on presentation by Ken Whitaker (not used in this blog). It turns out taking conference photos is rather challenging because the projector blows everything out making the presenter look very dark. It seemed to work but it's obvious I'm an amateur at it.

Enterprise users are currently able to install RealStudio on any number of operating systems or computers, as long as the licensee is the only one using those license keys.

Will this privilege be continued into the new licensing, and if so how?

@Russ, You will be able to install your license key (and therefore the ability to build) on 2 machines. Since the IDE will be free, you can install it on as many machines as you need.

Lots of of great news here ... 64bit for linux will really bring RS back into the frame with perl/python/c* for me!

will r1 include the new framework

when can we expect r1 beta

@Owen, We don't announce upcoming betas, you can join the beta list and you will be the first to know when it's released.

Is the new pricing due for each platform? So to renew an Enterprise license the price is 1650 USD?

@tkaltschmidt, There will be no editions (so no Enterprise) with the new pricing. If your Enterprise license key is current when we switch, you will get a license for Desktop + Console + Web + Database Servers; it's exactly everything you get in Enterprise today and an annual renewal for all that would be $550. If you wish to renew your Enterprise at the current pricing for up to 2 years you can do that before the pricing change.

Lots of announcements during Real World 2012. Very exciting stuff... But still, there is 2 topics that we haven't heard about: Feedback and the Beta program. Currently, both of them are ( more or less ) linked to wether one's license is active or expired. Since the IDE will be free to use for anybody starting with 2012r2 release, what will be Real Software's policy then?

"Currently, both of them are ( more or less ) linked to whether one's license is active or expired"
I feel way more comfortable and complete with this h... ;-P

@Eric, You won't need to have bought a build license to use Feedback but you will have to be using the current IDE because we don't bugs filed against old releases. The rules that govern the beta are subject to change, but our requirement plans to remain that you are using the current IDE.

sorry, i was unclear. I meant the Enterprise equivalent, of course. And with platform i meant Windows, Linux, Mac. But i read your answer that platforms are always included in Desktop, Web and so on. Seems fair to me. But what means database server? best Thomas

@tkaltschmidt, Database Server is to connect to databases other than RealSQL.

Assuming the new module structure is out and today I buy licenses for all 4 modules for one year. A year from now, I decide to only renew desktop, db thus leaving the web and console behind.

Now.. lets say another year goes around and I decide I want all the modules again. Will I only pay the renewal fee for all 4 (Since at one point, I paid full price for all 4) our will I have to pay the full price for the ones I let lapse?

@Unknown, As with current Real Studio license keys, you can renew your keys before or after expiration.

If one has a personal license with time left on it when the change over occurs, what will that be converted to?

@kgarnjost, Personal license keys will be converted to Desktop keys. You will be able to build on and compile for all 3 desktop platforms + all the features of the IDE.

@Alyssa... thank you very much for the clarifications on the upcoming changes.

How will professional and personal be handled/distinguished, if both are given desktop? I have 4-years of professional upgrades already paid for, and as I read the thread, seems like no difference between the two once 2012R1 is released.

After reading the thread, I'm not clear on how personal and professional versions will differ in 2012R1. I have 4 years of professional already paid for, yet it appears I'll have desktop only, same as personal. Alyssa, any clarification? Thanks.

@Dan, I think Geoff answered your question above, please let me know if I can clarify any further.

Will the new framework have have preemptive thread support?

@SwoonRecords, No, at least not very soon but we are looking into ways to solve the problem.

@Mike, Yes, the new "Desktop" license will have all the feature sof the IDE for all desktop platforms.