Controls and Styles in iOS

We've got another update on Real Studio's developing iOS framework. iOS relies heavily on the use of styles so we want to get those out of the way early and that's the focus right now. Additionally, we are filling out the majority of events for the basic controls such as label, textfield, textarea and button. 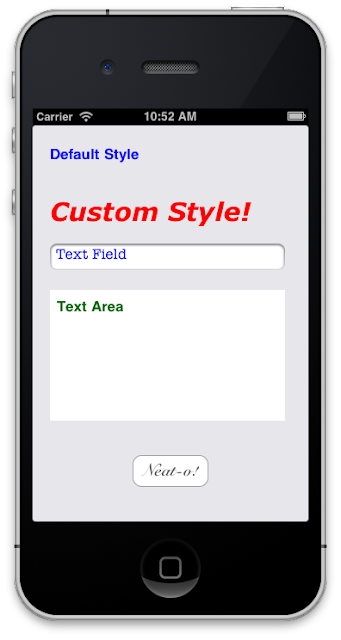 Your app will have a default style which all controls will use unless you override it. In the above example, the first label is showing the default style. The other controls have custom styles. If this does not yet look like a native iOS app, know that these are all native controls. Most iOS apps have navigation bars and tabpanels which we have not yet implemented. But those are certainly on the schedule for the first release that includes iOS support.

It's important that we get the style support right because eventually web and desktop apps will use the same style API we develop for iOS. Put another way, we are designing a style API for iOS with the desktop, the web and iOS in mind.
Posted by Geoff Perlman at 4:13 PM

Well, Joe Strout is certainly the right guy for the job. As a matter of fact him working at REALsoftware has led me to renew my license till 2017 :-)

Thank you so much for the continued updates!

Are you going to implement support for VoiceOver?

Does this mean that we will be able to design also web apps that follow the iOS scheme (controls, styles etc)?

@ Rulle - You can already do that to a large extent today. I've created web apps that look and feel a LOT like an iOS app. Access our Orders Example app from an iPhone to see what I mean. For now, you will have to use Chrome on the iPhone due to a bug in Mobile Safari on iOS 6. Apple will likely have that fixed soon.

Hi Geoff, I'm new to Real Studio and cannot get any of this to work on a windows 7 laptop with IE9 or Firefox 14 as a standalone

Any help would be great, Thanks
Bill

@ Bill Katts - contact me at geoff@realsoftware.com and give me some more info on what's going on.